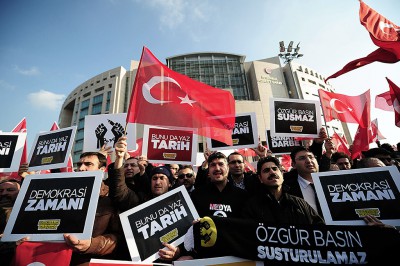 Workers of the Zaman newspaper hold placards that read, „free media can not be silenced“ and „Zaman won’t be silenced“, during a demonstration against controversial raids targeting the Zaman newspaper and television channels linked to US-based Muslim cleric Fethullah Gulen, on December 19, 2014 in Istanbul. A Turkish court remanded in custody the head of a national TV network and three ex-police officers on terrorism charges, in a controversial case linked with the number one foe of President Recep Tayyip Erdogan that has strained EU ties. AFP PHOTO/OZAN KOSE